Insurance for Flood Damage to Your Home 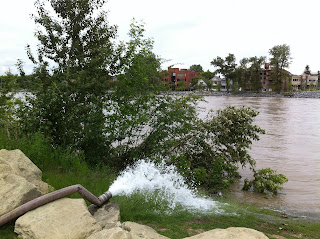 Pumping flood water back into the river

"This policy does not insure … loss or damage caused directly or indirectly by flood, and the word "flood" means waves, tides, tidal waves, and the rising of, the breaking out or the overflow of, any body of water, whether natural or man-made…"

The exclusion clause is carefully drafted so as to provide the insurance company with the widest possible protection against this type of claim.

The language employed is quite comprehensive.  Damage arising "directly or indirectly" from flood is excluded from coverage, and the word "flood" is defined broadly so as to include things that people would not normally think of as flooding, such as tides and waves.  Flooding from any body of water, including man-made sources such as reservoirs, is excluded.

Courts in a number of Canadian provinces have upheld this form of exclusion clause.  In Catalano v. Canadian Northern Shield Insurance Company, 2000 BCCA 133, municipal workers diverted water from overflowing culverts so that it inundated the plaintiff's business.  The B.C. Court of Appeal held that the diversion was not a separate intervening cause of the damage, and that since the original source of the water was overflow arising from heavy rainfall and melting snow pack, the loss came within the policy definition of "flood" and was excluded.

In the recent emergency in Alberta, work crews in certain locations have erected berms and other barriers to divert overflow from rivers.  Although these actions are intended to protect residential areas from flooding, some property owners have probably found that the diverted water increased the flow over their land.  Assuming that the Alberta courts adopt the B.C. interpretation, the ensuing flood damage would be excluded under the typical home insurance policy.

In an Alberta case, the Court of Queen's Bench also accepted the insurer's interpretation of this clause.  In MacNichol v. Insurance Unlimited (Calgary) Ltd., 1992 CanLII 6185 rising water in the Peace River breached a dam, causing blocks of ice to go over the dam and crash into a pump-house that was under construction.  Although the immediate cause of the damage to the pump-house was the action of the ice blocks pounding against it, the court concluded that the direct cause was the rise and overflow of the river, which triggered the exclusion clause.

In another B.C. case, however, the Court of Appeal adopted an interpretation more favourable to the insured.  In B.C. Ferry Corp. v. Commonwealth Insurance Co. (1987), 40 D.L.R.(4th)  766, the insured owned a ferry terminal which was damaged by heavy waves during a severe storm.  Since the evidence showed no abnormal rise in the water levels, however, the appellate court concluded that the event did not come within the extended definition of "flood" in the policy, which encompasses waves, tides, and tidal waves.  Although it was wave action that damaged the terminal, there was no rising of, breaking out, or overflow of any  body of water - the flood exclusion did not apply.

Although the Insurance Bureau of Canada has said that there is no coverage for "overland flooding" in Canadian home insurance policies, there is an alternative point of view.  If the original source of the water is overflow from a river, the damage comes within the standard flood exclusion and is not covered.  The exclusion does not use the word "overland", however, so the wording does not extend to any water that enters a home from outside regardless of the source.

There has been heavy rainfall in many areas of the province over the last week, and water that seeps or leaks into a home due to excess precipitation, and that does not originate in an overflowing river, stream, or reservoir, would not trigger the flood exclusion.  Such water damage would come within the coverage provided in an "all risks" policy, and would likely be covered as "storm" damage in a specified perils policy.

Here are some other kinds of losses that might be covered, even if the home policy contains a standard flood exclusion:
All of the above applies to insurance for residential premises.  Business insurance is in an entirely different category.

Although standard business policies contain a flood exclusion similar to the one in home policies, business owners can purchase flood coverage for an extra premium.  This option is not available to home owners.

Even if a business policy does not have a flood endorsement, the flood exclusion often contains language stating that the exclusion does not apply to "resulting damage".  Under this exclusion to the exclusion, direct flood damage is not covered, but if building systems such as fire alarm and suppression, refrigeration, or security are damaged by flood waters, and then there is additional damage caused by the failure of one of those systems, this is "resulting damage" and it is covered.  An example might be the loss of the contents of an industrial freezer to spoilage where water shorts out electrical systems, causing the freezer to shut down.

If you are a business owner you should look at the specific terms of your policy and consult your broker, public adjuster, or legal counsel for assistance in determining what is and is not covered.

View my profile on LinkedIn: http://www.linkedin.com/profile/view?id=50396098&trk=nav_responsive_tab_profile
﻿

Any legal information provided is general in nature and may not apply to particular situations. It does not constitute legal opinion or advice. Please consult your lawyer regarding your specific legal issue.
Posted by Unknown at 15:07