Would You Insure This House? 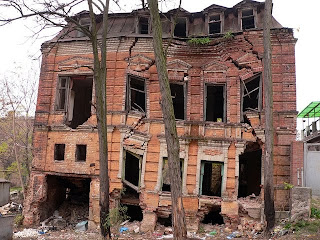 
Anyone who has applied for insurance on a house or commercial building knows that the insurance agent will want to complete a questionnaire disclosing detailed information about the condition of the building.  If the insured gives false information, the insurer can revoke coverage for misrepresentation.  A lot of people are probably unaware that they have an ongoing legal obligation to inform their insurance company of any significant change in the condition of the insured property, and that the insurer can deny a claim because of failure to report a "material change in the risk".
The source of this obligation is a statutory condition that is incorporated into most property insurance policies in Canada: "The insured must promptly give notice in writing to the insurer or its agent of a change that is material to the risk and within the control and knowledge of the insured."  Matters that might be considered material include changes in use or occupation, major renovations, or alterations to electrical, heating, alarms, or other important building systems.
Insurance underwriters often dispatch an inspector to look at the home or building before issuing the policy.  The inspector may or may not have any particular qualifications in engineering or construction.  The fee paid for the inspection is small, and the inspections are often cursory.  With home insurance policies, the inspector generally does not enter the house, and the review carried out is often referred to as a "drive-by" inspection as the inspector does little more than visit the location to confirm that there is a building with no obvious pre-existing damage.
What happens if the inspector is in a position to note a condition about the building that is material to the risk, but that the insured has not disclosed to the insurance company? The insured could argue that the insurance company had knowledge of the state of the building, so the statutory condition doesn't apply.  The same argument might be raised in the face of a misrepresentation defence.

From the insurance company point of view, the inspection is for a very limited purpose and is not intended to confirm every detail in the insurance application.  Carrying out a thorough inspection would increase underwriting costs, which would have to be passed on to the insured through higher premiums.  The insured is in the best position to provide information about the property, and insurers should be able to rely on information in the insurance application without further inquiry.
In Mah v. Wawanesa Mutual Insurance Company, however, a majority of the Alberta Court of Appeal﻿ was prepared to impute the knowledge of the inspector to the insurance company.
The insured bought a run-down house from his brother.  The house had been insured by Wawanesa, and the brokerage representing Wawanesa took an application from the new owner and agreed to bind coverage pending acceptance of the application by the insurer.
The insurance company knew that the building was unoccupied.  Between the date of the new owner's application and the date the policy was issued, however, an official with the regional health authority attended at the property and posted a notice on the rear door stating that the house was unfit for human occupation.  The notice was on bright orange paper, and the trial judge concluded that the owner must have seen it when he came by the house to cut the grass and take away the trash.  The owner did not report the health department's order to the insurer.
The insurer asked the broker to check on the type of heating system and age of the house, and to provide a photo "to confirm the dwelling's continued existence".  The broker sent a retired surveyor to conduct an inspection.  For $100, the surveyor attended at the property, carried out a "walk-around inspection", and took several pictures.  He did not enter the building.  He submitted his photos to the broker, along with a one-page handwritten report describing what he had seen.  The broker passed this note and the photos on to  Wawanesa's underwriting department.  One of the photos showed the back door; the orange notice was visible, but the print was not readable.
Wawanesa issued the policy, but denied coverage when the property was damaged by fire, citing the failure of the insured to report the health authority's order declaring the house unfit.  The surveyor was not called to testify at trial, so it is not known whether he actually read the health department notice or not.  The trial judge dismissed the action, and the insured appealed.

The fact that the insurance company did not have actual knowledge of the health department order was not in dispute.  The case turned on what the surveyor knew, and whether or not that knowledge could be attributed to the insurer.

The reasons of the trial judge were a little vague regarding the state of mind of the surveyor.  The judge said that "one could assume" that the surveyor saw the health department notice, then took note of the fact that he did not testify.  This suggests that the judge drew an adverse inference from Wawanesa's failure to call the surveyor.  The judge had concluded that the owner must have seen the notice on one of his visits to the property.  The majority in the Court of Appeal said that on the same basis, the judge's assumption about the surveyor's knowledge amounted to a fact finding that the surveyor saw the notice too.

In addition, the statutory condition requires notice to the insurer "or its agent".  In the view of the majority, the notice need not come from the insured, and the health authority was actually a better source of information about the fitness of the building.  Since the surveyor/agent had notice, the condition was satisfied and the insurer could not avoid coverage.

For homeowner's policies, the costs involved in carrying out a detailed inspection cannot be justified as a routine part of the underwriting process.  Nevertheless, it appears that anything visible from outside the home will be considered within the knowledge of an insurer who orders a "drive-by" inspection prior to issuing a policy.  Certainly, any plaintiff's lawyer faced with a misrepresentation or non-disclosure defence will want to obtain production of the insurer's inspection report.

﻿
Any legal information provided is general in nature and may not apply to particular situations. It does not constitute legal opinion or advice. Please consult your lawyer regarding your specific legal issue.
Posted by Unknown at 17:06