No Juries For Insurance Misrepresentation Cases 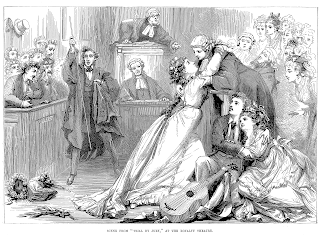 Does trial by jury lead to chaos in the courtroom?


In a decision released Friday, the Alberta Court of Appeal denied the plaintiff's application for a jury trial in a life insurance claim: Coulter v. Co-operators Life Insurance Company.  The two Justices in the majority agreed that the insurer's misrepresentation defence was a claim for equitable relief which cannot be tried by a jury.  The dissenting Justice, who characterized the misrepresentation defence as statutory rather than equitable, would have permitted a jury trial.

The Misrepresentation Defence
The life insured was a long-time policyholder with Co-operators who applied for additional coverage less than two years before his death.  After investigating the claim, Co-operators paid the benefit on the original policy, but denied the additional benefit, taking the position that it was entitled to void this coverage as the life insured had misrepresented important facts on the recent application.  Co-operators relied on ss. 652 and 653 of the Alberta Insurance Act, R.S.A. 2000, c. I-3, which state that misrepresentation of a material fact in the life insurance application renders the coverage voidable by the insurer within the first two years after coverage takes effect.
The Alberta statutory provisions are derived from uniform life insurance legislation, and similar provisions are in effect in all the common law provinces and territories of Canada.
When the beneficiary sued, Co-operators raised the misrepresentation issue in its statement of defence, citing the Insurance Act provisions.  The defendant was content to defend on this issue, and did not counterclaim for rescission of the insurance contract.  The beneficiary applied for a jury trial, but this application was denied by the Chambers Judge, who directed that the trial should proceed by judge alone.

The Majority Decision
In the majority opinion, Mr. Justice Cote referred to the historical distinction between the common law courts and courts of equity.  In civil cases, the common law courts could award damages for breach of contract and other legal wrongs.  A broader range of remedies was available in the equity courts, including specific performance and declaratory relief.  Jury trials were available in the common law courts, but not in the courts of equity, where cases were decided only by judges.
Although the two courts are now joined into one, the distinction between common law and equity remains, and juries are not permitted in cases in which equitable relief is claimed.
There was no dispute that the plaintiff was claiming damages for breach of the insurance contract, and that this was a common law claim.  According to Mr. Justice Cote, however, the defence raised by Co-operators was essentially a claim for rescission of contract.  This was an equitable remedy, and since common law courts are restricted to damages, a jury could not decide the misrepresentation question.  The Chambers Judge was therefore correct in denying the application for a jury trial.
Justice Cote was careful to point out that although the reasons for denying the plaintiff a jury trial may seem to be based on a technical historical distinction, there are sound policy reasons for restricting equitable relief to judges.  Equitable remedies are discretionary.  In exercising their discretion judges are guided by previous cases, and by principles established in maxims such as "Delay defeats equities", and "He who seeks equity must do equity".  In the view of Mr. Justice Cote, the distinction between the principled exercise of a discretion and "mere sympathy or fairness" would be "almost impossible" to explain to a jury.  These cases are therefore unsuited to trial by jury.
In a claim for breach of contract or tort, on the other hand, the judge instructs the jurors that they must award damages if they conclude that the evidence supports certain findings of fact; there is no discretion involved.

The Dissent
In his dissenting judgment, Mr. Justice O'Ferrall seemed to accept that equitable claims involving the exercise of discretion are unsuited to trial by jury; in his view, however, the insurance company was not claiming equitable relief at all.
"Rescission" was not specifically pleaded.  In its statement of defence, Co-operators said that it was entitled to "void the policy" by virtue of the Insurance Act provisions.  This was a statutory defence rather than an equitable claim, and "What the jury would be asked to do in this case is determine whether or not the insured ... made a misrepresentation with respect to a fact or facts material to the insurance."  In his opinion, this was the kind of factual question that juries are especially well qualified to decide.  There is a presumption in favour of the right to trial by jury, which should be respected.
For the majority, however, Mr. Justice Cote pointed out that the Insurance Act provisions did not purport to displace the role of equity or replace the equitable remedy of rescission of contract.  The statute did not provide a comprehensive code for misrepresentation cases, such that it could be concluded that the legislature intended to occupy "the whole field" and do away with the role formerly carried out by courts of equity.

A View From the Bleachers
Justice Cote is right to prefer a principled or policy-based approach over reliance on the historical accident of the division between equitable and common law courts.  Where legal issues are more important to the case than factual issues, judges have an extensive knowledge of the law that jurors lack.  Jurors, on the other hand, are just as qualified as judges to decide whether or not a witness is lying, or to assess evidence and make findings of fact.

The jury is an important institution in our society.  Justice is delivered by members of the community who can bring a diversity of background and experience to the courtroom, rather than by a judicial "expert" with extensive, but perhaps narrow, training in one area (the law).  The jury introduces a populist, democratic element into our system of justice.  Trial by jury is a long-standing right that should only be taken away for cogent reasons.

It is conventional wisdom that an insurance company never wants to face a jury.  The man in the street will always be blinded by sympathy and emotion, it is thought, and will side with the individual plaintiff over the big, impersonal corporation every time.

This is not necessarily the case.  Several years ago, defence-side insurance lawyers in Ontario began to serve jury notices routinely in personal injury cases, believing that their clients would be better served by the practical, common-sense approach of jurors.  Whether to seek a jury trial is a question that both plaintiff and defence counsel should ask themselves in every case; it is a strategic decision that depends on more than just the sympathy factor.  A precedent that denies the life insurance beneficiary her claim to a jury trial cuts both ways, as insurers will not be able to put their defences to juries in future cases.

What about the Coulter case? Although it is easy to see how the discretionary aspects of certain equitable remedies, such as injunctions and specific performance, might be difficult for jurors without any legal training, it is unclear how equitable principles or maxims could come up in a misrepresentation case.  The issue is whether or not the insured misrepresented important facts on the application.  This is something a jury can decide.  Since the conduct of the insurance company is not in issue, maxims like "He who seeks equity must do equity" or "He who comes to equity must come with clean hands" don't have any bearing.  Delay is not a factor, as the insurer can only raise non-fraudulent misrepresentation within the two year incontestability period established by the insurance legislation.
The availability of jury trials in misrepresentation cases should be based on a pragmatic assessment of the real issues in the case, and not on the somewhat arbitrary fact that "rescission" of contract is historically a remedy granted by courts of equity.
Coulter v. Co-operators Life Insurance Company, 2013 ABCA 295
Contact Richard Hayles at Billington Barristers:

﻿
Any legal information provided is general in nature and may not apply to particular situations. It does not constitute legal opinion or advice. Please consult your lawyer regarding your specific legal issue.
Posted by Unknown at 15:48