Supreme Court: Disqualification Is Not the Only Remedy for Law Firm Conflict of Interest 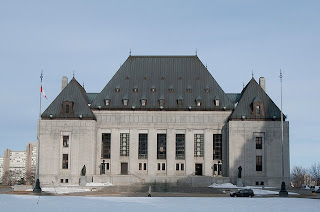 The Supreme Court of Canada


McKercher LLP is a substantial law firm in Saskatchewan.  The Canadian National Railway Company retained McKercher from time-to-time on a variety of matters, and as of late 2008, McKercher was representing CN on three files: a personal injury claim, a real estate acquisition, and a receivership.  In that same time frame McKercher accepted a retainer to act against CN in a class action claiming that CN had overcharged farmers in Western Canada for the transportation of grain.
McKercher did not inform CN that it planned to initiate the action on behalf of the class.  The law firm hastily terminated its existing CN retainers before serving CN with the statement of claim in the class action, claiming $1.75 billion.  This was the first notice that CN received that McKercher was acting in a class action against CN.  CN applied for an order removing McKercher as solicitor of record for the class action plaintiffs, claiming conflict of interest, and the motion judge granted the order.  This decision was reversed by the Saskatchewan Court of Appeal.
A further appeal to the Supreme Court of Canada raised two issues: (1) can a law firm act against a current client on a matter unrelated to the client's existing files? (2) if not, does the firm's conflict of interest result in automatic disqualification, or should alternative remedies be considered?

The "Bright Line Rule"
In a decision released July 5, the court found that McKercher was in a conflict position, invoking the "bright line rule" from its earlier decision in R. v. Neil, 2002 SCC 70, [2002] 3 SCR 631.  Under the bright line rule a law firm cannot represent clients adverse in interest without first obtaining the clients' consent, even if the two matters are unrelated.
In its ruling in the McKercher case, the Supreme Court emphasized certain important aspects of the bright line rule.  The rule is based on a fiduciary's duty of loyalty.  It assumes that conflict of interest is inherent and inescapable in certain situations.  For that reason the rule cannot be rebutted or attenuated.
The scope of the rule is limited, however.  It only applies where the immediate interests of the client are directly adverse in the two matters.  It applies only to the client's legal interests, as opposed to business or strategic interests, so the rule is not triggered where the firm accepts a retainer on an unrelated matter from a company that is a business competitor of another client.  It should not be raised as a tactic in an effort to disqualify the law firm when the client has no real concern that its interests will be adversely affected (the Court suggested that an institutional client would not be permitted to abuse the rule by retaining a single lawyer in one office of a national firm, expecting that this would disqualify all other lawyers with that firm from acting against the client).  It does not apply in circumstances where it is unreasonable for the client to expect that the firm will not act against it in unrelated matters.  For instance, it is accepted practice that lawyers who handle work for "professional litigants" such as governments, banks, and other large institutions may act against these clients in unrelated matters.
The decision of the Court was delivered by Chief Justice McLachlin, who said that McKercher's concurrent representation of CN and the class action plaintiff "fell squarely within the scope of the bright line rule."  The legal interests of CN and the Western farmers who made up the class were adverse.  CN was not trying to abuse the rule, and it was reasonable for CN to expect that its lawyers would not act for plaintiffs that were suing CN for $1.75 billion.
McLachlin, C.J. went on to find that McKercher was in breach of other duties.  A law firm has a duty of commitment to its client's cause, and should not summarily drop a client in order to avoid a conflict of interest.  The firm also owes its client a duty of candour and is required to advise the client of any developing matters that could effect the retainer.  The failure to advise CN of its intention to act for the class action plaintiff constituted a breach of this duty of candour.

The Disqualification Remedy
Disqualification from acting in the pending litigation is the normal remedy when a law firm is in breach of the bright line rule, and this is the remedy that the motion judge had granted to CN.  The Court recognised that disqualification is not always appropriate, however, and sent the case back to the motion judge for a determination of the proper remedy.
The Courts exercise a supervisory jurisdiction over the administration of justice.  This includes an inherent jurisdiction to remove law firms as solicitors of record in pending litigation.  The factors that militate in favour of disqualification are: (1) the potential for the misuse of confidential information; (2) the risk of compromised or impaired representation; and (3) the need to uphold the integrity and reputation of the administration of justice.
McLachlin, C.J. was of the view that there was no potential for the disclosure or misuse of confidential client information in the instant case.  There was no prior or current retainer giving McKercher access to confidential information that would be directly relevant to the claim brought by the Western grain farmers.  The motion judge concluded that McKercher, by virtue of its involvement in previous CN litigation, had acquired a unique understanding of the strengths, weaknesses, and attitudes of CN with respect to litigation, and that this general knowledge was confidential information.  The Court of Appeal, on the other hand, said that a general understanding of CN's litigation strengths and weaknesses did not constitute confidential information.  The Supreme Court seems to have accepted this view, as the Chief Justice concluded that there was no confidential information at risk.
Since McKercher's other CN retainers had been terminated, there was also no concern that McKercher would fail to provide CN with strong representation in the concurrent matters out of a desire to favour its new clients.  The only remaining concern, then, was whether or not allowing McKercher to continue to act for the class would damage the integrity and reputation of the administration of justice.
Where there is a need to protect confidential information, or a risk of impaired representation, Madame Justice McLachlin said that disqualification is generally the only suitable remedy.  In cases where the concern is the protection of the reputation of the justice system, disqualification may be required in order to send a message that the law firm's disloyal conduct is condemned by the courts; this is not, however, necessary in every case.
In cases involving the protection of the integrity of the judicial system, factors that may point in another direction include: (1) delay in bringing the motion for disqualification; (2) prejudice to the new client's ability to retain counsel of choice; (3) difficulty on the part of the new client in finding alternative counsel; and (4) the fact that the law firm acted in good faith, reasonably believing that acceptance of the new retainer did not breach the bright line rule or law society conflict regulations.  Since these issues were not before the motion judge, and there was no evidence on these points, and it was necessary to remit the remedy question to the lower court.

Up to now, lawyers might have thought that a finding of conflict of interest would automatically result in disqualification.  It is understandable that the Supreme Court would want to allow flexibility in the area of remedies; disqualification is a blunt instrument that cannot suit every case.  If a firm is disqualified, even early in litigation, new counsel will have to be retained and briefed.  This causes delay.  Some of the work that the former firm has done will have to be repeated by the new firm, and thousands of dollars in fees may be wasted and unrecoverable.  Although the Supreme Court ruling does not permit a litigant to use disqualification for purely tactical purposes, even when this is not the case disqualification constitutes a serious tactical disadvantage to the party that has to retain new counsel.  This party, the new client, has not done anything wrong, so there is always an element of unfairness when a litigant's counsel of choice is disqualified.

Although in principle remedial flexibility is a good idea, it is difficult to understand how it could be applicable in this case.  The fact that the bright line rule applies even when the two retainers are unrelated was established by the Court's decision in R. v. Neil in 2002, so it seems unlikely that the McKercher firm had a good faith belief that the new retainer fell outside the rule.  Certainly McKercher could not have been surprised when CN moved for disqualification.

In addition to the finding that McKercher was in conflict, there are also the findings that McKercher breached its duty of commitment by terminating the earlier retainers in order to get around conflict rules, and that the firm breached its duty of candour by failing to advise CN that it was putting together a massive class action against CN.  If the Court wants to send a firm message condemning this kind of conduct on the part of lawyers, this case would seem to support that message.  CN did not delay in bringing its motion, the class action litigation was then in an early stage, and the Western grain farmers ought to be able to find another Western firm that has the capacity to handle a large and complex class action lawsuit.

It seems improbable that any remedy but disqualification could be appropriate, but we will have to await the decision of the motion judge on the issue of remedy.
Canadian National Railway Co. v. McKercher LLP, 2013 SCC 39
Contact Richard Hayles at Billington Barristers:

﻿
Any legal information provided is general in nature and may not apply to particular situations. It does not constitute legal opinion or advice. Please consult your lawyer regarding your specific legal issue.
Posted by Unknown at 10:01